New study from FarrPoint predicts that digital connectivity costs could rise by over 11% this year, and by nearly 8% in 2023. But even so, consumers are urged to not cancel their contracts as being connected will save them money in the long run.

The new findings, published by FarrPoint, used current inflation estimates to track the average increase in household spending on fixed line broadband and mobile contracts over the next five years. They show that over the next five years, connectivity costs (including mobile and fixed line contracts) will have increased by over a third to £1,508pa, up from £1,123 this year (see chart below). 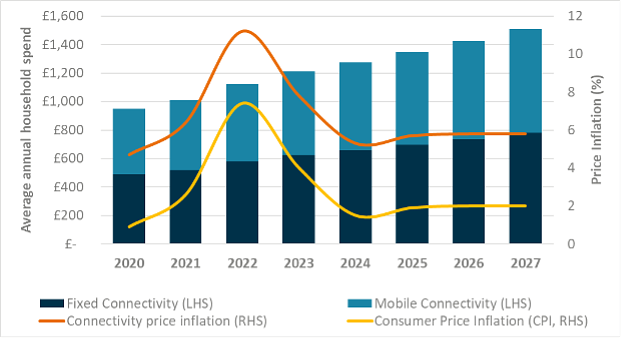 Andrew Muir, FarrPoint’s CEO, says while many consumers might well see mobile and broadband costs as something they could cut back on to save on monthly household bills, he is urging everyone to “seriously think again”.

Consumers could save up to £780 per household per year

He says they should shop around for the best deals instead, given recent research revealed how using the internet – for online shopping, working from home, banking and getting cheaper energy deals – actually delivers an overall economic benefit of £780 a year to the average UK household, (this will open in a new window)according to analysis by the Internet Association. Access to the internet is also key for accessing many public services, such as doctors’ appointments and council services.

UK Consumer Prices Index (CPI) inflation – the rate at which prices are rising – soared to 9.4% over the 12 months to June 2022, the Office of National Statistics revealed last week (20th July), meaning prices are now growing at their fastest rate in 40 years, driven predominantly by the cost of fuel, energy, and food.

Households can expect additional increases to their connectivity costs until inflation falls, with several of the UK's big broadband and mobile providers already introducing annual price rises earlier this year. In most cases providers base increases around the CPI rate of inflation plus an additional premium, usually between 3.7 and 3.9 percentage points depending on the provider, (this will open in a new window)according to Which?.

This is expected to add pressure on households, particularly those on low incomes who are already the highest group in the UK to suffer from digital exclusion, (this will open in a new window)according to telecoms regulator Ofcom.

“We would urge households who may be contemplating ditching their mobile phone or broadband to make savings to their household spending, to seriously think again. These are now vital domestic services and cancelling them to save money in the short-term could prove hugely counterproductive and costly further down the line, especially for price-savvy consumers who can still genuinely find the best deals and prices from shopping around online.

“With more everyday services migrating online during the pandemic and the push to remote working, there is a real risk that without internet access, households would be getting rid of arguably their number-one method of cutting various costs simply to save on current everyday spending. It’s just too valuable in the wider context.

“While the government’s cost-of-living package was a good first step, we’d like to see more being done by the market to protect customers and add increased flexibility to their monthly bills, which can be a real barrier for many households.

“This could mean bringing down the price and increasing availability of pay-as-you-go type tariffs across fixed as well as mobile services, which would mean those on low household incomes don’t have to commit to long-term contracts which can put people off given the current uncertainty across the economy right now.”

The rising broadband prices modelling was completed by the economic analysis team at FarrPoint. Find out more about what we do and view some of our latest case studies.